Our Science Investigation Team will release codes, products and artificial data sets, with the goals of building awareness of and broad support for the Roman dark energy program and inspiring the community to develop methods and carry out investigations that will maximize the cosmological return from Roman.

Submission of a Science White Paper to the Astro2020 Decadal Survey

Two decades after its discovery, cosmic acceleration remains the most profound mystery in cosmology and arguably in all of physics. Either the Universe is dominated by a form of dark energy with exotic physical properties not predicted by standard model physics, or General Relativity is not an adequate description of gravity over cosmic distances. Roman emerged as a top priority of Astro2010 in part because of its ability to address the mystery of cosmic acceleration through both high precision measurements of the cosmic expansion history and the growth of cosmic structures with multiple and redundant probes. We illustrate in this white paper how mission design changes since Astro2010 have made Roman an even more powerful dark energy facility and have improved the ability of Roman to respond to changes in the experimental landscape. Roman is the space-based probe of DE the community needs in the mid-2020s.

Link to paper on the arXiv: arXiv

We created the first Roman [O III] mock galaxy catalog from a light cone simulation generated by the group of Risa Wechsler at Stanford. The simulation contains about 3 billion galaxies over 10,313 sq. degrees and up to redshift 2.3. Each galaxy contains its own spectral energy distribution which is generated to fit the most updated luminosity function and color evolution measurements. Starting from the simulation, the mock catalog has been created by selecting [O III] emitters with [O III] flux above Roman detection limit, which has been set to 6.5 sigma sensitivity at 6 exposure depth. The catalog contains galaxies in the redshift range 1 to 2.3, with a number density and redshift distribution that mimic the ones forecast for the Roman.

We generated a second mock galaxy catalog containing both [O III] and Hbeta emitted, where the Hbeta galaxies has been placed at a wrong redshift, as if the Hbeta lines would be misled as [O III] during the emission line identification process. This allows to study the contamination of Hbeta interlopers in the Roman survey.

This study will be publish soon in Massara et al. 2018.

The first catalog (WFIRST_sim_3.8sqdeg_v0.0.fits) includes photometry estimates in LSST(u,g,r,i,z) and Roman(Y,J,H,F184W) filter sets in AB magnitudes as well as estimate of photometric redshifts. This corresponds to 3.8 deg-sq in the sky from the combination of galaxies in the COSMOS (2 deg-sq), SXDS (0.8 deg-sq) and VVDS (1.0 deg-sq) fields with (RIZ <25 AB) with fainter (RIZ>25 AB) sources added based on CANDELS survey in five fields (GOODS-S, GOODS-N, EGS, UDS and COSMOS total of 0.2 deg-sq) boosted 19 times to match the area. Faint sources are added based on the density and colors of CANDELS galaxies on a Self Organizing Map (SOM) we generated for the CANDELS survey (plots and more details below). The final catalog contains ~2,200,000 sources where ~1,600,000 are based on CANDELS and the rest are brighter sources from the other three fields. We have not applied any cuts on magnitude in this catalog and it goes deeper compared to expected depths of LSST and Roman, however the photometric errors in each filter are assigned pseudorandomly based on the magnitude and expected depth in each filter.

To boost the number of CANDELS galaxies to match the combined area of COSMOS, SXDS and VVDS we need to know the approximate density of various kinds of galaxies. SOMs trained by colors of galaxies will organize galaxies based on their SED shape and therefore the density of galaxies in each cell represents the approximate density of different kinds of galaxies. CANDELS SOM is chosen as a 150x120 rectangular grid and is trained by 8 colors of LSST and Roman filters (u-g,g-r,r-i,i-z,z-y,y-j,j-h,h-f184w) until the wight dimensional weight vectors of the SOM cells represent the color distribution of CANDELS galaxies. At each cell we generate 19 x density of cell, SEDs based on the SED of the cell, slightly perturbed by photometric errors. An RIZ>25 cut is then applied to the area boosted CANDELS catalog before adding it to the COSMOS, SXDS and VVDS. Below, see the median g-r color of CANDELS galaxies on the SOM (left) and the g-r weight of the trained SOM (right): 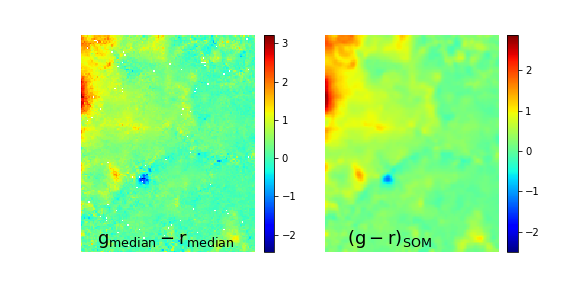 Here are the magnitude histograms, a color-color plot and magnitude error vs. magnitude plots from this catalog. 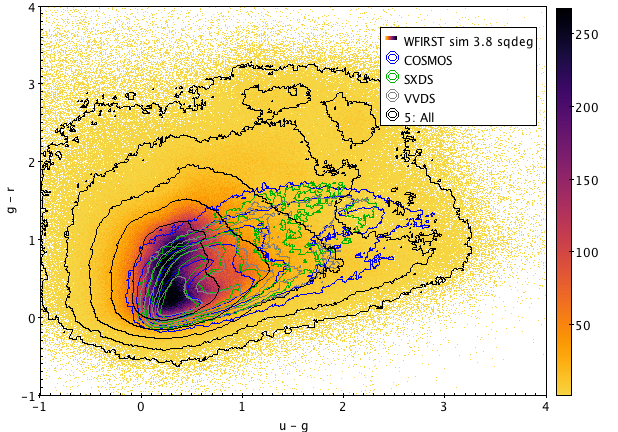 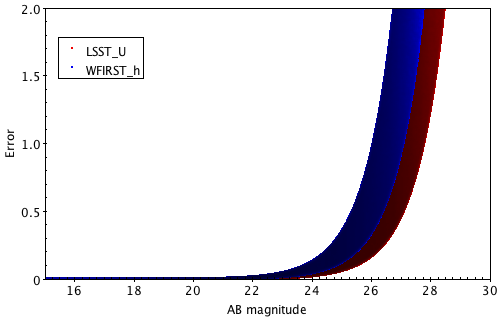 This catalog is not yet used for any major science, please direct any issues found and/or suggestions to shemmati@ipac.caltech.edu.

The second catalog (WFIRST_CANDELSbased_sim_0.2sqdeg_v0.0.fits) also includes photometry in LSST(u,g,r,i,z) and Roman(Y,J,H,F184W) filter sets in AB magnitudes as well as estimate of photometric redshifts, spec-zs when available and HST F160W, FWHM. The sources here are those in the five CANDELS fields (GOODS-S, GOODS-N, EGS, UDS and COSMOS) covering ~0.2 deg-sq. CANDELS photometric catalogs are published in GOODS-S, COSMOS, UDS and EGS and will be published in GOODS-N soon. In cases where the photometry in a Roman or LSST filter could not be measured using the neighboring filters in the CANDELS due to non detections, magnitude is set to 99.0 and limiting magnitude in the closest band is recorded as the error. A lensing cut is applied to this catalog based on (J+H) magnitudes and sizes (private communications with C. Hirata) and only sources meeting the lensing criteria are kept in this catalog with a total of ~44,000 sources.

If you used these catalogs in publications, please site Hemmati et al. (in prep), where the catalogs are used to find the Roman photometric redshift calibration requirements.

We will have simulations based on the SPHEREx model and emission line measurements for OII, OIII, Halpha, Hbeta from COSMOS.

A Roman module has been added to the GalSim package

GalSim is an open-source software for simulating images of astronomical objects (stars, galaxies) in a variety of ways. The bulk of the calculations are carried out in C++, and the user interface is in python. In addition, the code can operate directly on “config” files, for those users who prefer not to work in python. The impetus for the software package was a weak lensing community data challenge, called GREAT3.

However, the code has numerous additional capabilities beyond those needed for the challenge, and has been useful for a number of projects that needed to simulate high-fidelity galaxy images with accurate sizes and shears. For details of algorithms and code validation, please see Rowe et al. 2015.

The GalSim sofware package including the Roman module is available here. The versions past v1.4 include a Roman module and was started before this SIT started. This module will now be periodically updated by SIT members as the Roman hardware and survey parameters are adjusted. The next update is planned for June 2017.

The tightest constraints on cosmological models including cosmic acceleration, modifid laws of gravity, neutrino physics will come from a joint analysis of multiple cosmological probes. Figure 1 shows the forecasted constraints of “traditional” single probe analyses for clusters (yellow), BAO+RSD (red), and weak lensing (green) and a multi-probe analysis that utilizes these and several other observables that can be extracted from the data: galaxy-galaxy lensing, photometric galaxy, cluster weak lensing, clustering, SN from Roman (forecasts from David Rubin and Dan Scolnic), SN from the existing Joint Lightcurve Analysis, existing Baryon Acoustic Oscillation information from BOSS, and CMB information from Planck. These contours show statistical errors only (shape/shot-noise and cosmic variance). Since multi-probe analyses are highly constraining they impose tight requirements on systematics control. Figure 2 compares the this statistical errors only (blue) to forecasts that contain a realistic systematics budget (green). These systematics include uncertainties in the estimation of galaxy shapes and redshifts (photo-z, spec-z), cluster mass calibration, galaxy bias, and intrinsic alignment. Uncertainties due to baryonic effects (SN and AGN feedback, cooling) are not included. It is critical over the coming years to study these uncertainties and to develop the capability to control these systematics at the level of Roman multi-probe analyses. 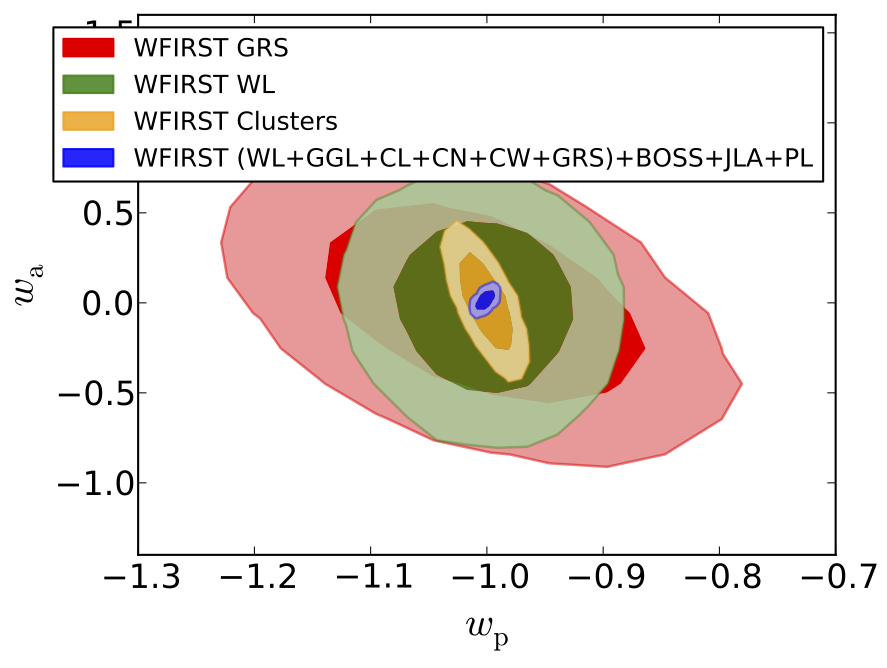 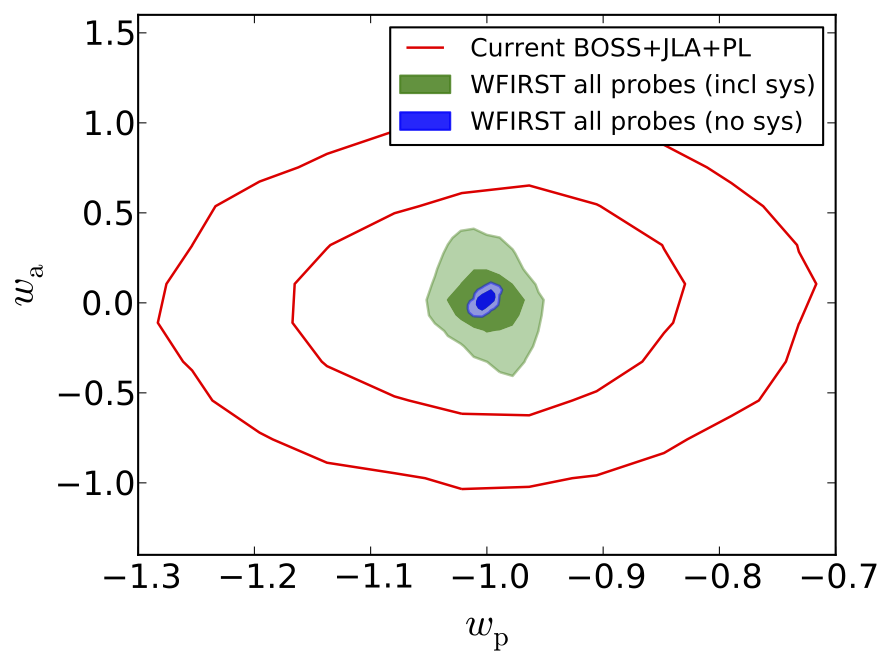 While cosmic acceleration models have a relatively established parameterization, this is not true for modified gravity theories. Figures 3 and 4 show our first forecasts of modified gravity scenarios, where deviations from Einstein’s GR are parameterized through \mu and \Sigma (please see Joyce, Lombriser & Schmidt 2016 for a quick introduction. Figure 3 shows constraints on these modified gravity parameters for a Weak Lensing+Galaxy-galaxy Lensing+galaxy Clustering (photometric) analysis for the nominal Roman survey (2,200 deg.^2) and for 2 extended survey scenarios (5,000 deg.^2 and 10,000 deg.^2, respectively). Figure 4 shows the difference of this multi-probe case to a Weak Lensing only analysis. 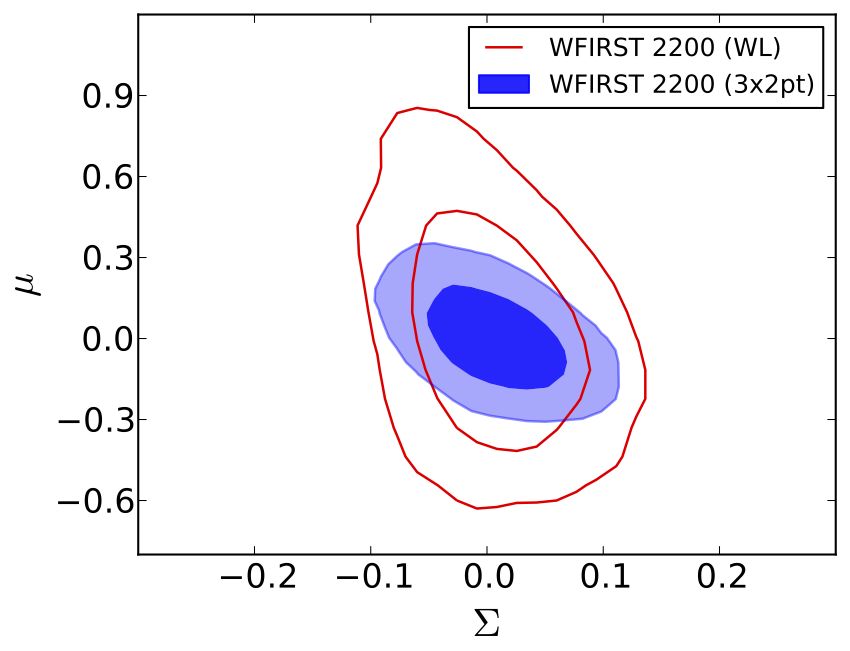